Maidanetske 2016: excavations at a Trypillia Mega-site

The joint expedition of Borys Grinchenko Kyiv University (scientific-research laboratory of Archaeology) and the University of Kiel researched the settlement near Maidanetske village, Talne region of Cherkassy district, August 17 - September 30, 2016 (fig.1-4). The magnetic survey was performed on few new sections (fig.1,- 2), and two areas (110 and 111 trenches) were explored in order to verify earlier detected anomalies produced by the objects, which were previously related to fortifications, public constructions and to some stratigraphy cases (fig.1,-1). 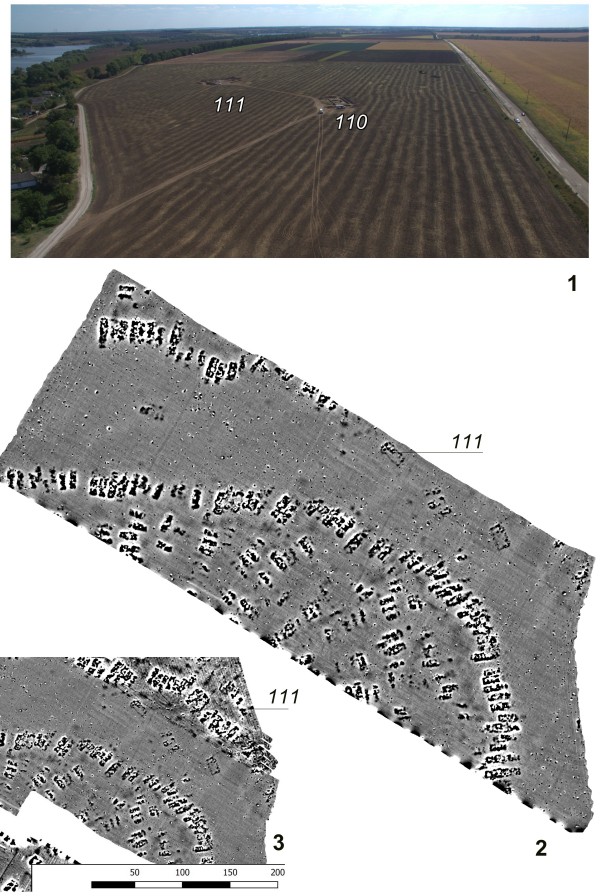 Researches of tr. 110  were aimed at studying the anomaly, documented in 2012 with the help of geomagnetic survey, which could be interpreted as traces of a ditch. On the trench, there were also other anomalies of different dimensions and configurations, overlapping the above anomaly. Several meters away there was also a range of anomalies produced by burnt buildings, a part of one of which was included into the dig site in order to study the correlation between the objects of the Trypillian Age. The total area of the dig site was 140 m2 (fig.2, - 1).

The works began with the setting out of two trenches facing N-S, 22 m long and 2 m wide each, 8 m away from each other. Step-by-step research was conditioned by the peculiarities of documentation of the ancient ditch remains, in particular – by the need to obtain as many as possible qualitative cross-sections that would allow its further reconstruction. In the western part of the dig site, 50 cm deep from the recent surface, there was found a non-inventory burial of a child (the length of skeleton bone lying straight on the back is 53 cm), oriented westward. Taking into account the depth of occurrence of the Trypillian materials on the area, this burial ground seems to belong to late period, perhaps, XX century. In the eastern part of the dig site the remains of the Trypillian dwelling represented by accumulation of two layers of clay coating were partially researched. Burning of the coating was mostly even, but separate fragments of slagged coating also happened. The dimensions of the dwelling in question reached 4.70 m in length and 1.20 m in width with North-South orientation. The depth of the coating occurrence began from 20 cm from daylight surface, its thickness in profile – up to 20 cm. Among the findings documented on the coating, there were broken tableware, clay loom weigh, bones of domestic animals, a piece of granite. A special attention should be paid to clay platforms representing rather fragmented object of smooth clay mass without admixtures, visually reminding the remains of altar or flooring platform (fig.2,-4). 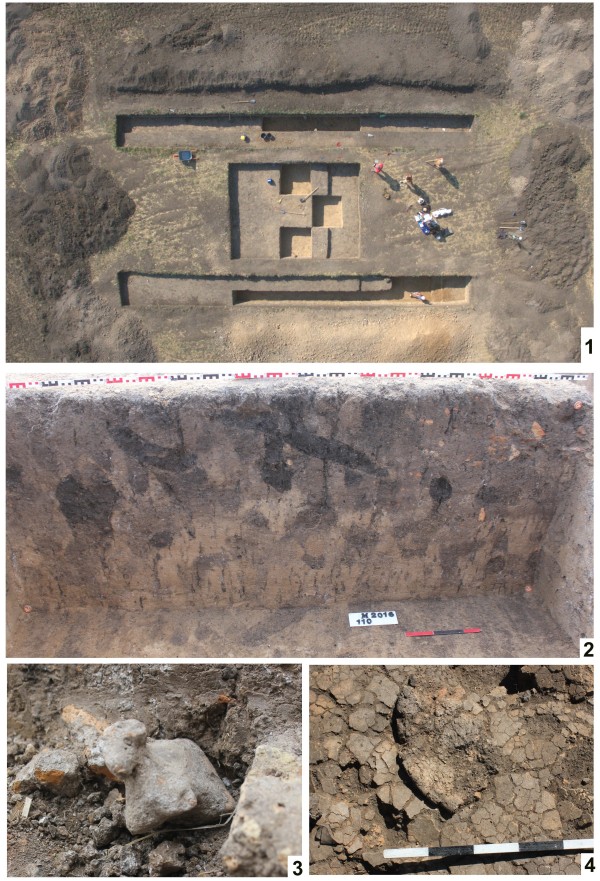 Fig. 2.Maidanetske  2016, trench 110: 1 – view  from the drone; 2 – the profile of the ditch in the space between the trenches; 3 – zoomorphic figurine and the coating in the ditch filling; 4 – clay platform with partially studied remains of the dwelling with the remains of a “cup”.

Within the whole tr.110 between the trenches, there was an ancient ditch facing West-East, approximately. In its eastern part it situated 2 m to the south from the dwelling remains. Depth of the ditch in different places reached from 130 cm from daylight surface in its western part, to 60 cm in its eastern part. The ditch filling is not even, the most loaded are its western part and the part not far from the dwelling remains (fig. 2, - 2). The parts of the ditch running close to the remains of the dwelling were occasionally tightly packed with burnt clay coating, ceramic fragments, and bones. Also, it is worth noticing among findings a miniature animal (perhaps, a sheep) figurine with pricking along the perimeter, and a piece of ceramic model of sledges (fig.2,- 3).

In the western part of the ditch, there was rather high concentration of bones of domestic animals and broken ceramic ware, with coating making comparatively insignificant contribution to the filling. It is obvious, that on a certain stage the deepening began to be filled also by broken tableware, animal bones, and coating - and the layer-by-layer materials prove it. At 3 m distance southward from the remains of the dwelling a midden was also detected. It crossed the ditch in its southern part and was about 80 cm deep and 150 cm in diameter. Among the findings documented in the midden there are fragments of ceramic, clay coating, bones. It is worth mentioning, that the coating, found in the filling of the ditch and the midden, has nothing to do with the remains of the burnt building in the northeast corner of tr.110, they belong to the different building (buildings), that had burn earlier.

Thus, the research on tr. 110 proved existence of documented by the magnetic survey ditch remains in this part of the settlement, the midden and the remains of the Trypillian dwelling, as well as the presence of certain stratigraphy. Erection of the ditch preceded the building of the new range of houses. The fortifications itself, most likely in the form of palisade, were dismantled when the boundaries of the settlement were changed. The deepening was partially used for the burying of remains of burnt house (houses) liquidated in the process of reconstruction of this part of the settlement.

On trench 111, set up in this very part of the settlement, to the south-east from tr. 110 (fig.1,-1), the research of large building was carried out, the anomaly from the building was also documented with the help of magnetic survey (fig. 1,- 2,3). The building is situated in undeveloped space between inner (first) and the next (second) development ovals of this Maidanetske settlement (fig.1, - 3). It is necessary to mention that while building the houses belonging to the second development oval, the “red line” was moved and as a result a small area appeared around the object. This circumstance allows supposing that the house from tr. 111  had been built somewhat earlier than the above general development began. The anomaly showed accumulation of dwelling remains in the north-western part, instead its … part is represented mostly by the contour occurrence. In general, the excavations confirmed these preliminary conclusions. 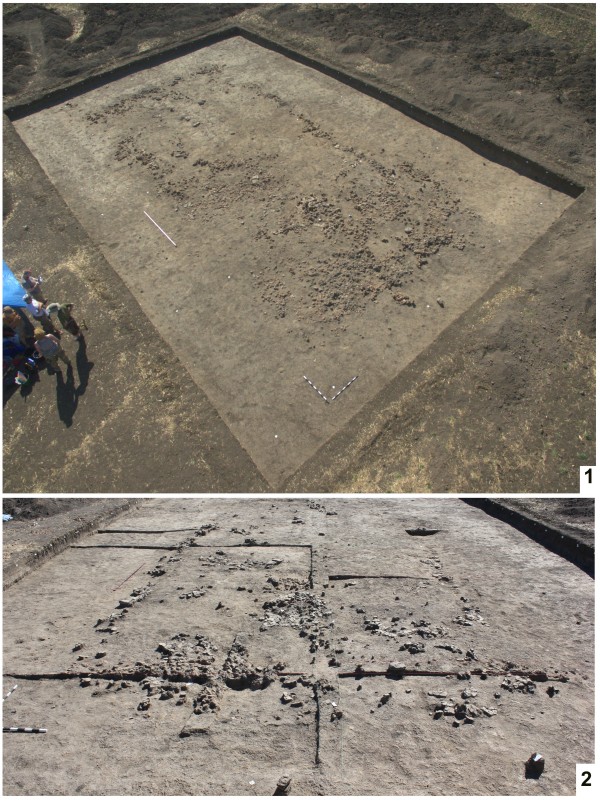 Fig. 3. Maidanetske 2016, trench 111: 1-3 – ceramic ware among the remains of a building; 4 – ceramics from the cultural layer under the remains of the building; 5 – flooring platform-altar; 6 – remains of the podium along the walls; 7 – pit filled with coating under the floor of the building, on the background – central flooring platfrom-altar; 8 – filling of the pit from the previous exploration period of the trench 111.

On tr.111, 15 on 23 m (345 m2 research area), the remains of dwelling with dimensions 20x11 m were researched, the long axis facing approximately Northeast – Southwest (fig.3). The remains included the accumulation of burnt clay coating (both with and without admixture of chaff), broken ceramic ware and fragments of ceramic ware, stones - all unevenly dispersed in subrectangular contour at the depth of 0.6-0.9 m from the recent surface. The leveling of the dig site showed that in ancient times, just like now, on this territory there was a small plateau’s inclination towards the valley and the stream nearby. The highest accumulation of coating was found in north-eastern part of the dig site where it laid in several considerable pilings, two-layered in places. With that, the upper layer consisted of broken pieces with admixture of chaff, with imprints of wood (splits and poles), here and there burnt to the state of slag, and the lower layer, the one on the earth surface – consisted of bricks 1-5 cm wide without admixture of chaff (fig. 4,- 5,6). Also, under the upper layer of coating, broken ware was found – from big, biconical bowls and small amphorae to kitchen pots, both separate and in groups (fig.4, -1-3), the broken ware was on the earth surface. Under tile-like coating one could see solely the fragments of ware, at the depth of 5-10 cm lower (fig.4, - 4).

Southeastern part of the dwelling remains was outlined by a stripe of coating (in some places – tile-like, in other places – with admixture of chaff), here two layers were also documented, and tile-like coating was always below. Under the coating the remains of ware were found, in particular – in south-eastern corner, containing no less than two small amphorae and a sphere-conic jar. At some areas the contour consisted of rather massive (up to 3-4 layers) accumulation of slagged coating with admixture of chaff, bearing mostly imprints of poles. Inside the contour, several big broken kitchen bowls and a pot partially preserved, some of them dispersed on a big territory, what can be viewed as the result of demolition process of the dwelling while it was burning. Besides, the location of big stones here is worth noticing (some of them were preliminary identified as querns and pestles), situated along the symmetry axis of the dwelling thus creating something like a corridor. Among the other findings on this area, it is worth mentioning wholesome and fragmented ceramic loom weights of a vertical weaver loom, concentrated on the territory more than 10 m2 in south-eastern section of the dwelling, closer to its center.

Consequently, we have the remains of the dwelling with the area of more than 200 m2, with no less than one flooring platform-altar and the podium along the perimeter of a part of the room. However, there are no traces of hearth or ovens typical for the local buildings. The location on the territory of the settlement, the peculiarities of the interior, and the dimensions give ground for viewing the dwelling of tr. 111 as one of civil buildings of local purposes. 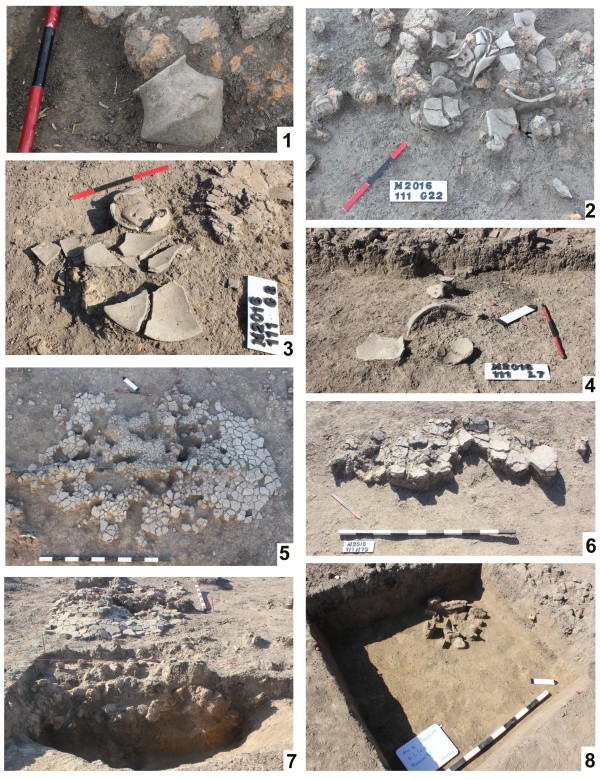 The discovery of stratigraphy on the site has been an important event, in particular the discovery of 3 pits which were filled at the moment of construction of the civil building. Their filling consisted of the soil with numerous fragments of ceramic ware, animal bones, as well as burnt coating with imprints of wooden constructions - the parts of burnt houses (fig.4, - 7,8). There are reasons to believe that the pits and their filling relate to the previous stage of existence of this part of the settlement. One of the pits, filled with coating, situated in the place where the flooring platform-altar was built later (fig.4,- 7).

During excavations at trenches 110 and 11 a lot of diffewrent pottery was found, including "kitchen (fig. 5) and painted (fig.6-8). All items could been dated typologically to the third phase of CI stage (Tomashivka local group)/ Also some pottery from Chechelnyk local group was found (fig. 9). 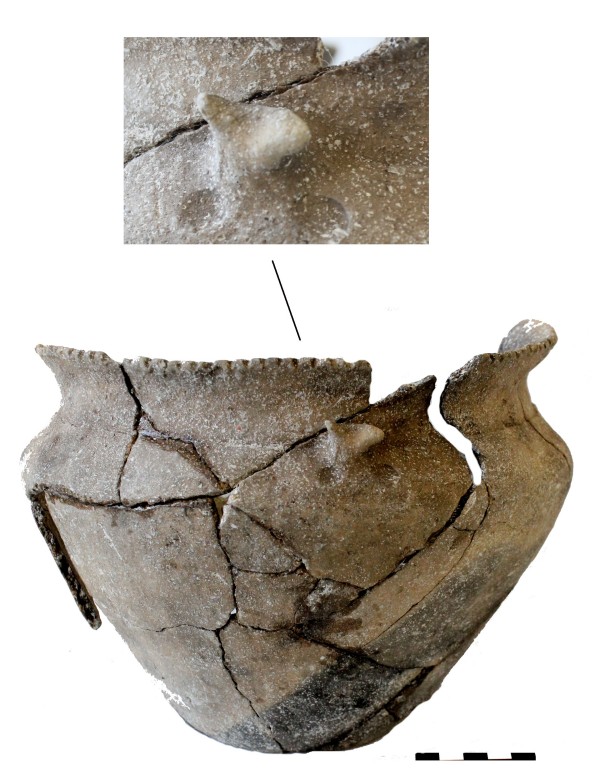 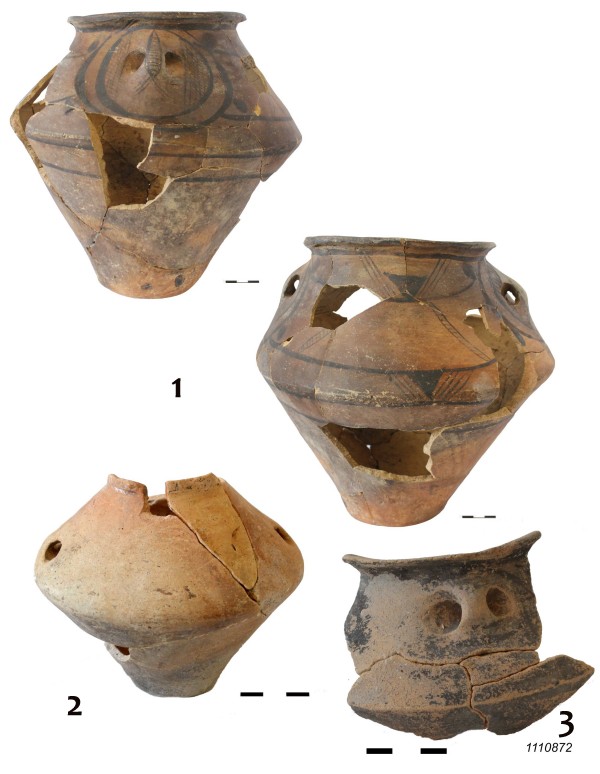 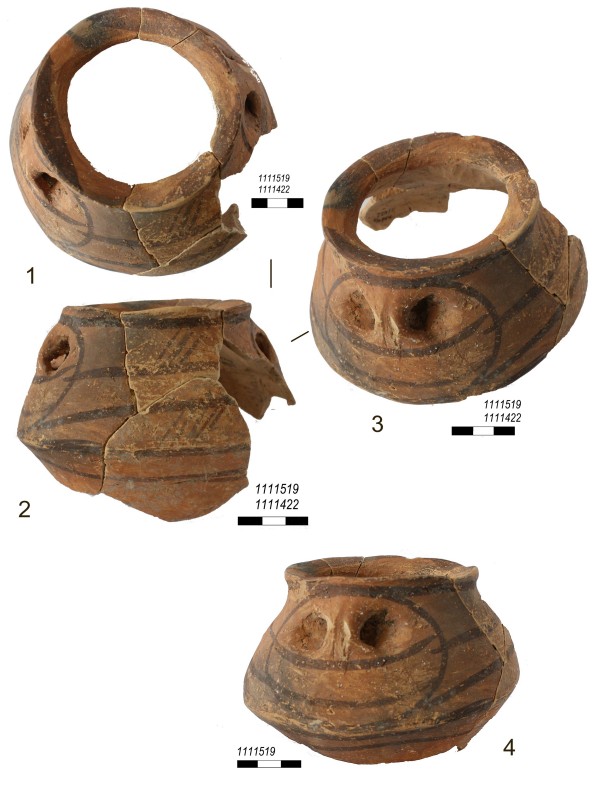 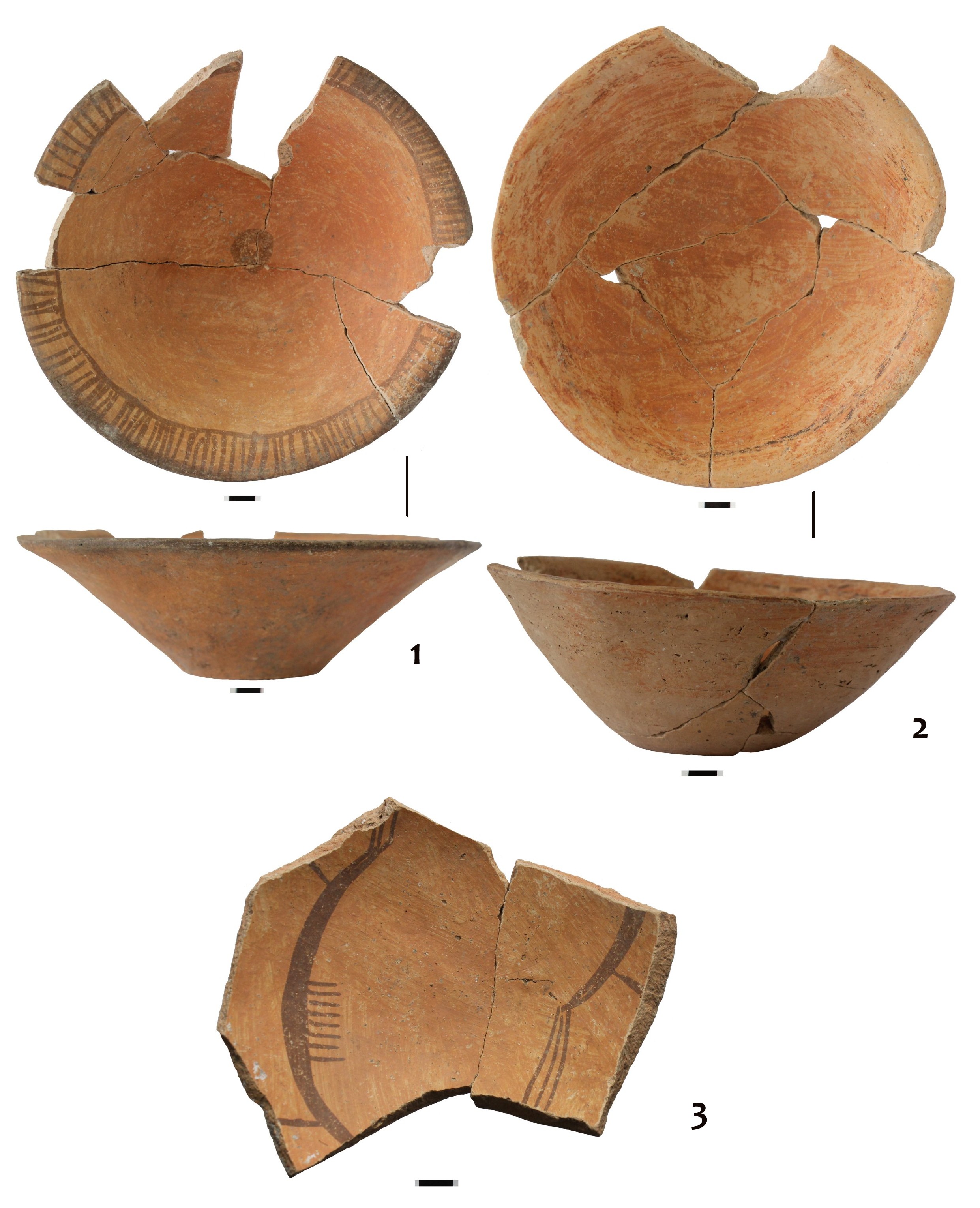 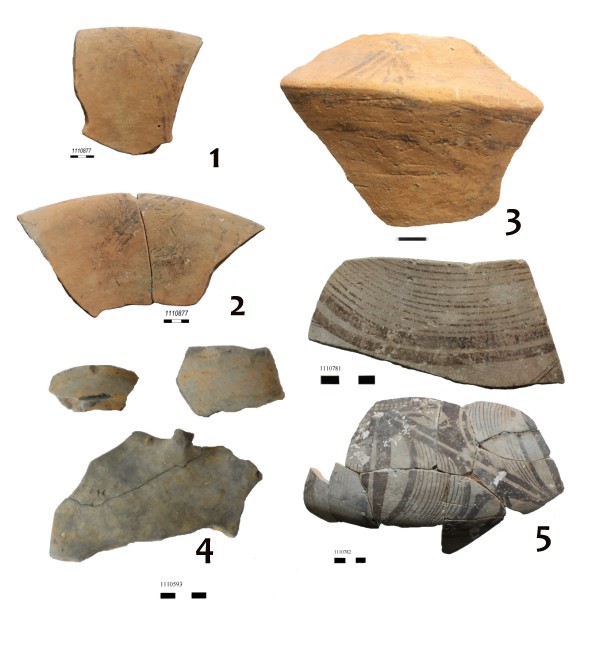 During 2016 research the anomalies produced by defense constructions (the ditch under palisade) and civil buildings were examined, both Maidaneteske objects were studied for the first time. The stratigraphy found in different areas of the settlement proves the results of radiocarbon dating of the samples from the excavations in 2013; the samples were found in other part of the settlement and covered period in 150-200 years. Together with observations on the settlement plan, it points at longer history of the settlement development than it was thought previously (70-100 years), and, in Maidanetsk case, this history included the change of development master plan, relocation of fortifications, etc. It is quite possible, that these events were accompanied by certain ritual actions, represented by the filling of the ditch, pits, also by the remains of burnt buildings.